Getting to 3,000 Facebook Likes Without Being Sleazy - Brittany's Best
7895
post-template-default,single,single-post,postid-7895,single-format-standard,qode-quick-links-1.0,ajax_fade,page_not_loaded,,qode_grid_1300,footer_responsive_adv,qode-theme-ver-12.0.1,qode-theme-bridge,wpb-js-composer js-comp-ver-5.1.1,vc_responsive

I’ve witnessed a Facebook miracle. Someone on my Facebook feed has gone from 200 to 3,000 fans in less than six months. The explosion of fans had me doing double-takes – a few days recently, he was gaining 100 likes per hour. I know firsthand how hard it is to lure fans, and especially to get comments and shares. I wrote about Facebook’s Slow Squeeze on Small Business, showing how they’ve narrowed reach and modified the news feed to push ad purchases.

In researching social media, I’ve started to follow some inspiring minds in marketing. I’ve spent hours poring over their tips and tricks to unlock the secrets of building a fan base. I would expect one of these gurus to launch a new page and start gaining fans hand over fist. Instead, to my great surprise, the soaring likes belonged to Scott – the modest artist behind Bucket Of Bolts and self-confessed Facebook neophyte.

Since interviewing Scott years ago, I’ve watched him slowly gain Facebook likes and Etsy sales. I had to know the secret behind his sudden meteoric rise; had he unlocked a trick I’d failed to discover from the top Facebook masters? Was he secretly a wizard of viral marketing?

The truth was both disappointing and enlightening. Like dieting, there was no magic pill – just good principles and hard work. Scott shared his strategies for building a large and loyal following with me, and the wisdom may surprise you. It goes against many of the things I’ve read from the Facebook gurus, who insist that you’ll have to pay for ads and do some shady fan-gating to get a following.

Don’t post something just to post. Don’t clutter up your wall with too many things that don’t have anything to do with your products or business.

This jives with what Facebook’s News Feed Director said in a recent TechCrunch interview1 – pages that get lots of comments, likes and shares increase their reach over time.  The reverse is true as well – boring pages that don’t get much engagement will see their reach decrease over time. 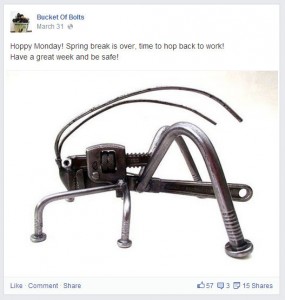 Try and be yourself when you write comments. Humor seems to work for me. If I can think of a funny thing to say, I do it.

[box]Tip from Scott: I’ve found that single photos get more views than multiple photos posted together in an album. So when I post a finished project, I post 3 or 4 single photo posts instead of a single album post. It’s helped with both views and shares.[/box]

I am very flattered to be an inspirational artist. I hope to encourage others to express themselves. 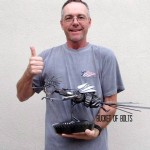 Tips from Scott: Do your best on each and every project you work on. Take the best photos you can, and improve them with photo editing software. Make things that appeal to a wide variety of people. Make it interesting, and share your process. The likes will come.

Try to work with others who are doing the same type of work you are. It’s way too hard to do it alone. Encourage them, share advice and give fellow artists a shout out. I don’t view other artists as competition, I view them as friends. I want to help them grow, and they inevitably do the same for me.[/box]

People like what Scott’s page has to offer – the proof is found not only in his 3,000 likes, but the fact that Scott rarely loses a fan. With his no nonsense, all-about-the-art approach, Scott has defied the odds when it comes to small business success on Facebook. Could it work for you?

Scott has yet to take other social media platforms by storm. Until he does, join followers from all over the globe on his Facebook page and stop by his Etsy shop to see his ready-to-ship pieces.